I loved my time as a volunteer Grandma along with all the Parents and Grandparents, during DGS's pre-school through the Primary Grades. The local Pumpkin Patch's Halloween Field Trip was always a treat. (Pictures after this project).

Garage sale find (after repair and painting) - I added a 'grain sack stripe' in black - from Donna of Funky Junk Interiors stencils - over the white. The tin whale with that beady eye was another find. 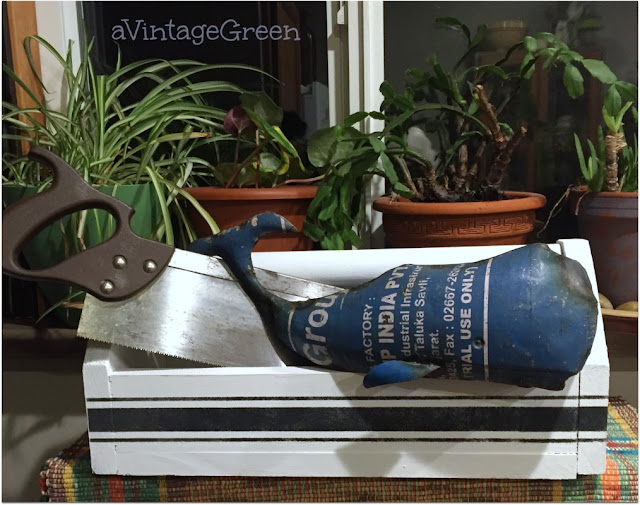 The red wooden tote handle was broken so DH replaced it with a piece of dowel after repairing the end which was also broken.

I painted this grade 8 school project with 2 coats of ASCP White and when dried, a coat of Fusion Satin Sealer. A handy (but heavy) container for holding stuff or seasonal decorations. The red bled through in some areas so I used Zinsser Primer-Sealer Stain Killer Bulls Eye 1-2-3 (after this photo). 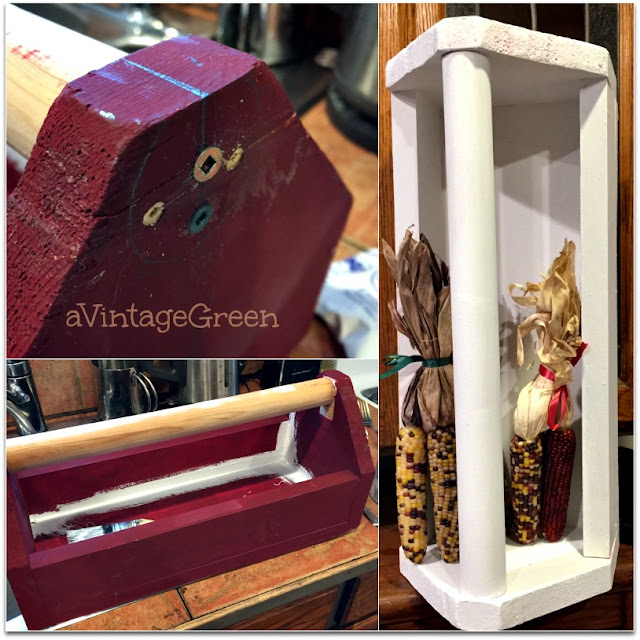 So ... a retrospective of Halloween Past

In 2007  DGS's pre-school class visited the pumpkin patch. Lots to see and touch. Pumpkins covered the fields and were piled high on the hay racks and in groups on the ground. The chances for exploration, interactions, the petting animals (and the look-at-only animals too) and the space to run bring back families by the hundreds every day in October. 2008 - Kindergarten - Serious play time, gold panning was and continued to be a favourite activity each year. 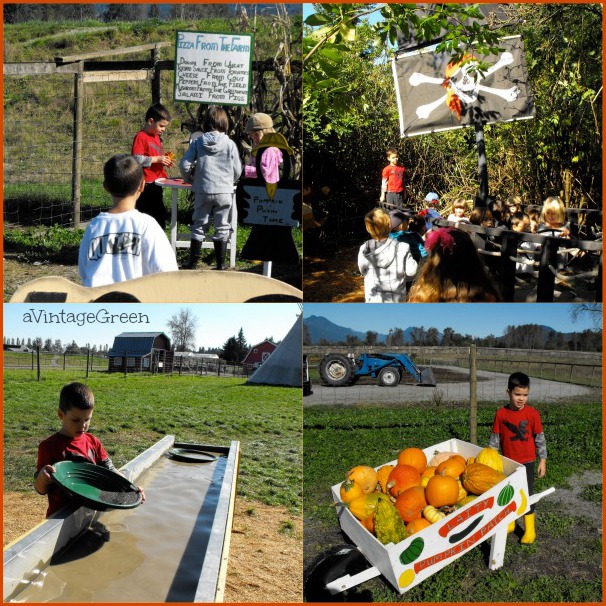 This is my favourite photo - the orange ladybug on a pumpkin stem. The boys in the group stayed looking studying the bugs on the pumpkins for quite some time. 2009 - grade 1 were lots of fun with DGS, the kids all knew the routines and were prepared for fun. 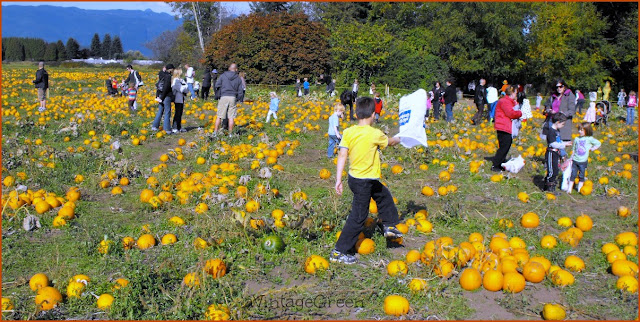 We've continued visiting the Pumpkin every year to visit, pick out pumpkins, visit the animals, gold panning, visit the small forest of imaginary scenes, find a path through the pumpkin patch maze and pick pumpkins.

2010 ? I know 7 years old kids continued to have a great time at the Pumpkin Patch and I know I was a class volunteer and went along too - but it was pre-blogging and I can't find any pictures on my lap top and I (whoops) wiped my desktop.


2011 was a great Halloween extravaganza for an 8 year old DGS and Dad carving those Pumpkin Patch treasures. 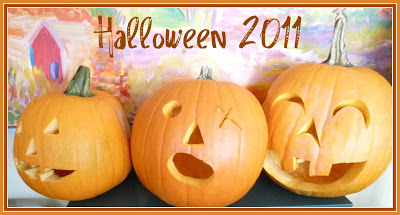 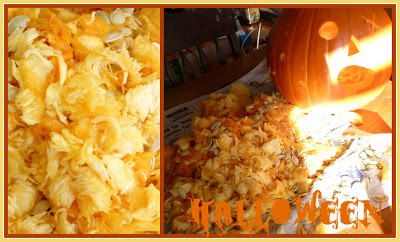 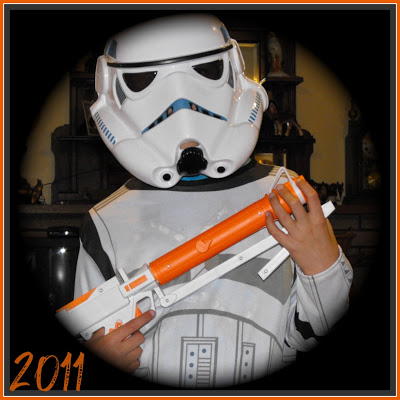 2012 DGS and DS's Halloween Decorating contributions (my favourite picture) from that post. 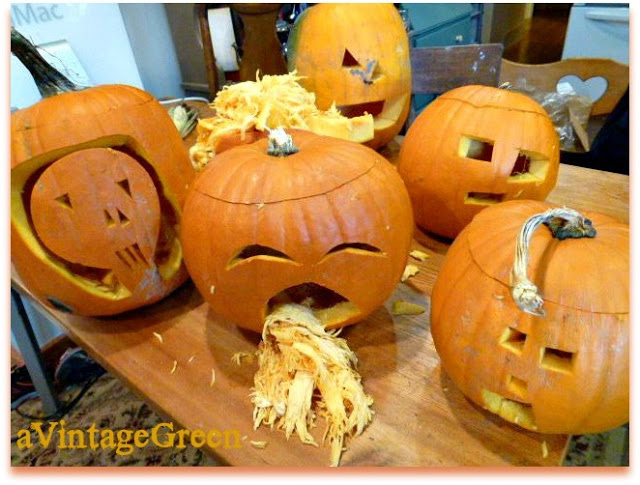 This Grandma (me) really loved Halloween at the Pumpkin Patch. 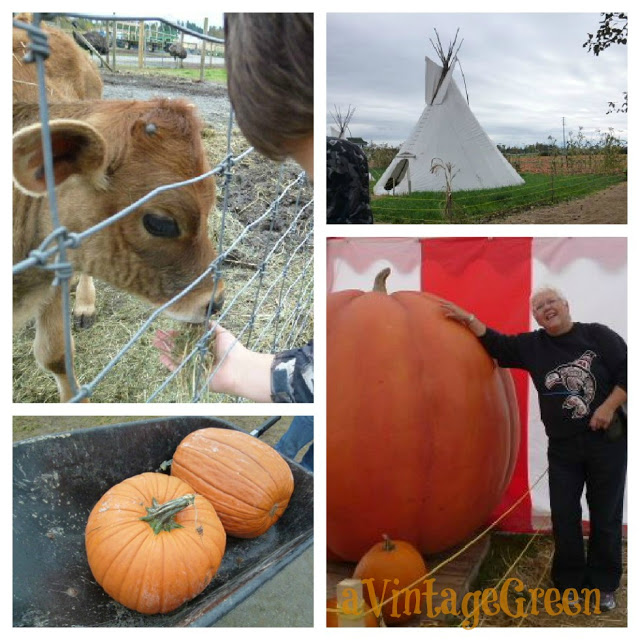 p.s. as a special treat DGS took ME to the Pumpkin patch in 2017 - the last visit trip with him. I got a bit teary and had fun walking the familiar paths and Maze and picking pumpkins. He was fairly bossy - taking the adult role I think.


Favorites  Decorations of Halloween Themed posts over the years.

A mixture of gourds and pumpkins, a folk carved and tin finned fish, peeks at special paintings. This was my 'beginning' in deliberately making vignettes. Before I just called it decorating. 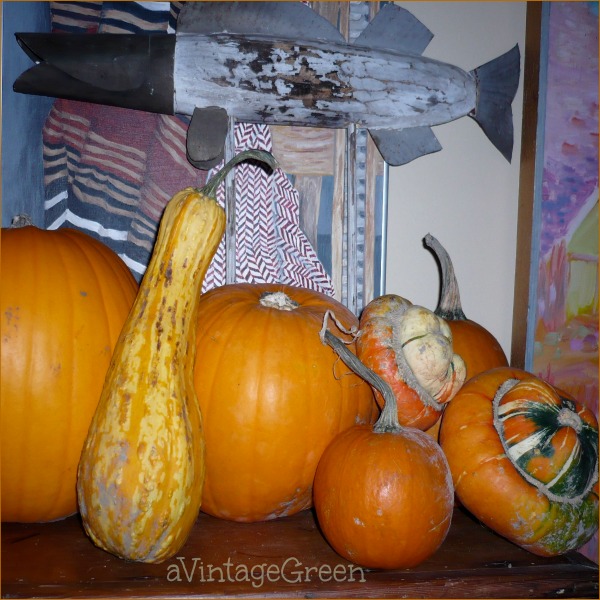 First try at finding burlap (this is landscape/plant wrapping burlap). This was before close weave burlap became easier to find (not including real burlap potato sacks). Gourds, waxed leaves, burlap and a great bowl. 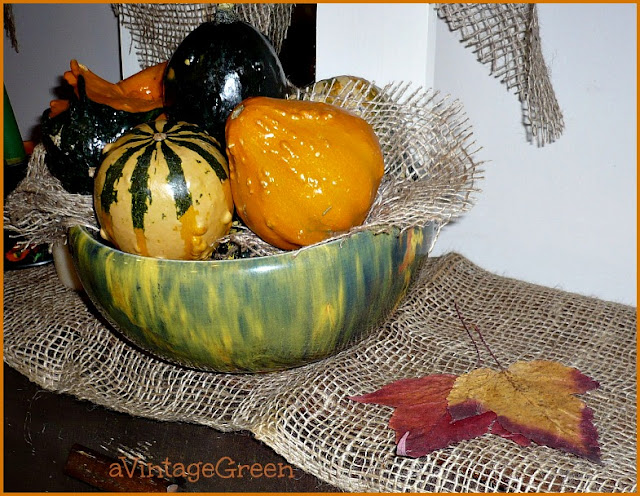 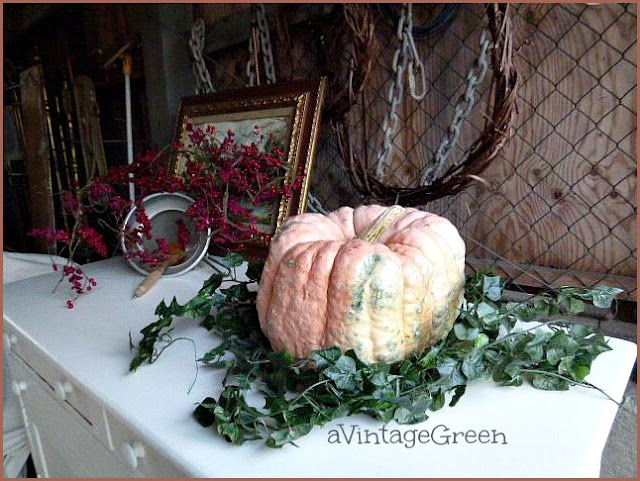 2013 - my first decorating for Halloween with a burlap banner and 'thrifted' finds.

It was also the year the Breast Cancer Month meaning became very real. 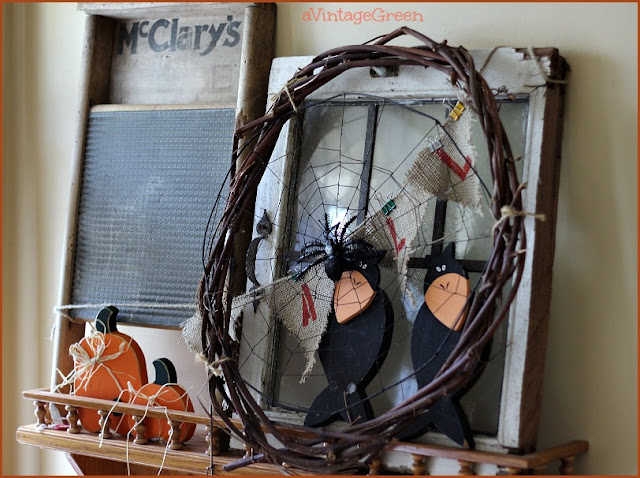 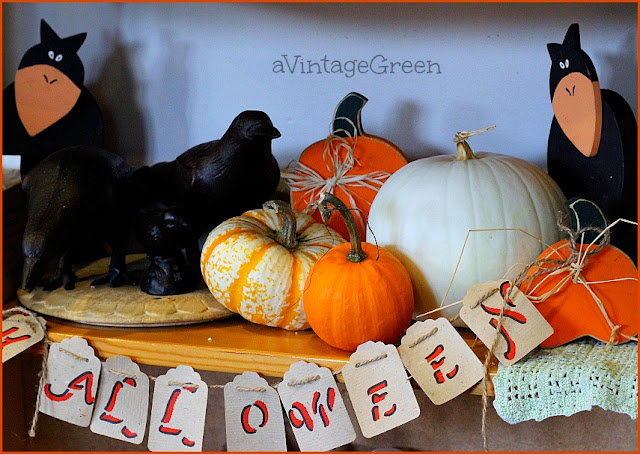 Didn't find a post about decorating at home but DH and I loved the long drives to our favourite Fruit and Vegetable Gardens Farm near Ashcroft - this was from a 2015 collage. 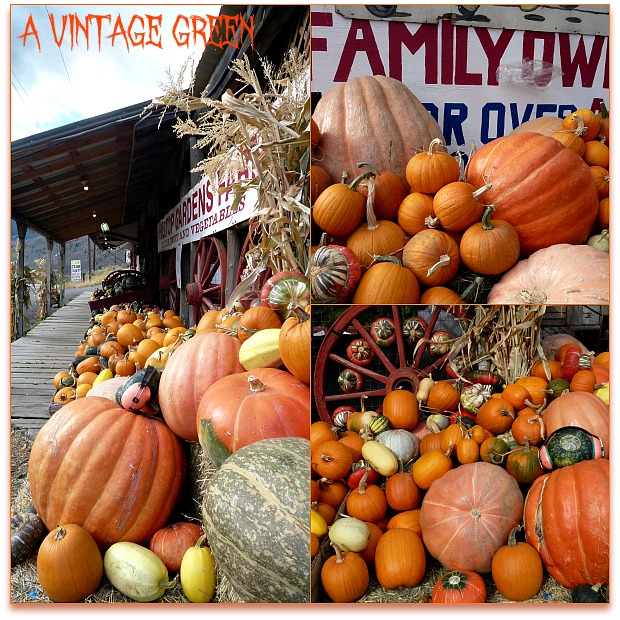 It took a few random pieces to make a Halloween fall grouping. The lantern was already rusty and worn looking, favourite faux pumpkin came out of storage (the bigger of the pumpkins here) and the front porch became the background, the pumpkins were picked up on an upcountry drive and the squash - a gift from a friend. 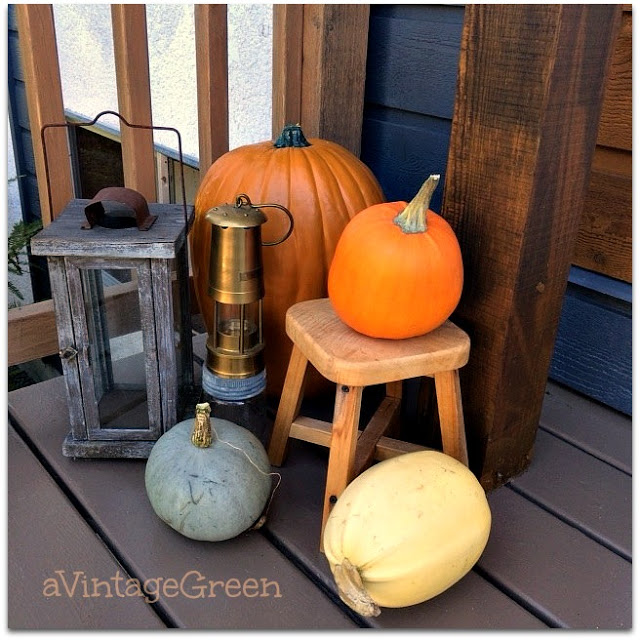 Another Halloween themed decoration, just bits and pieces added together. 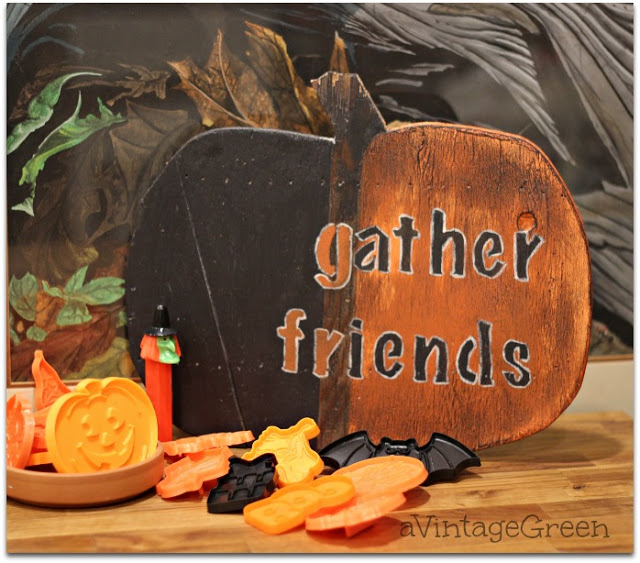 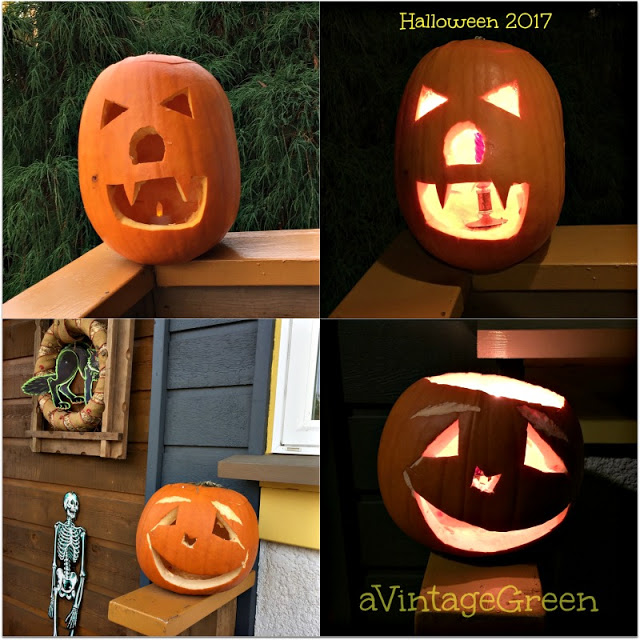 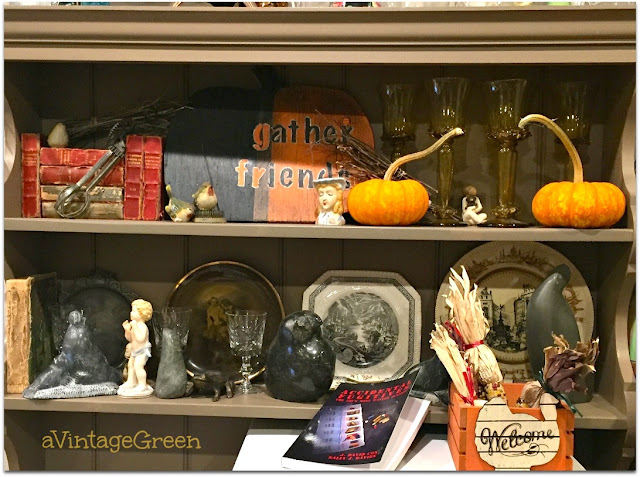 Our dear friends Dave and Sally who live on an edge of an island in the Pacific Ocean, off the grid.


Their blog is Our Off the Grid Home  <https://ouroffthegridhome.ca/>

They came for curry and a visit and brought us a signed copy of their new book: Accidental Fugitives The FBI's Most Wanted Seniors (Kindle or paperback). 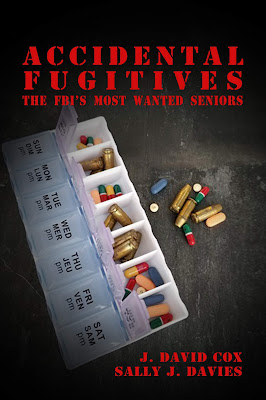 Sally likes to see what we have gathered since their last visit so I built a display mixing Halloween and some old favourite collectibles.


Thank you Friends for visiting today.

Jann of Have a Daily Cup of Mrs. Olson
Janet of Try It - Like It
Roseann of This Autoimmune Life
Michelle of The Painted Hinge
Stacey of Embracing Change
Kathy of A Delightsome Life
Kate of Chic on a Shoestring
Kerryanne of Shabby Art Boutique
Cecilia of My Thrift Store Addiction
Kathleen of Our Hopeful Home
Andrea of The Cottage Market
Donna of Funky Junk Interiors
Jen of A Fireman's Wife
Suzanne of Pieced Pastimes
Kelly of Under a Texas Sky
Pam of Pam's Party and Practical Tips
Cathy of Our Mini Family
Andrea of Scrapality
Anna M. of Strawberry Butterscotch
Maggie of Normandy Life
(Maggie has passed her weekly party to
Angie of Letting Go of the Bay Leaf)
Danielle of Finding Silver Pennies
Sabrina of Meet Our Life
Christine of Rustic and Refined
Cindy of Dwellings the Heart of Your Home
Susan of Love of Home
Lisa of Grandma's Briefs
Robin of Fluster Buster
Angie of  Knick of Time
Katie of Let's Add Sprinkles
Marci of Stone Cottage Adventures
Sam of Raggety Bits
Tarah of Grandma's House DIY
Rebecca of R and R at Home