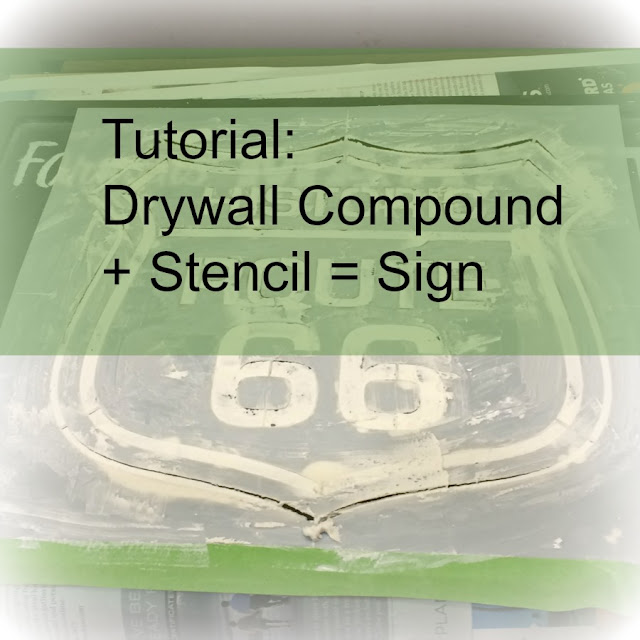 Always look forward to learning something new to me. This post it is using drywall compound to add a stencil to a board, using it two different way (thick and very thin coatings).

Since the thick drywall on the board was a FAIL (see later in this post) I tried again by scraping the first try off, then staining the board first, waxing/buffing then adding a fairly thin coat of drywall compound to the stencil. Better. 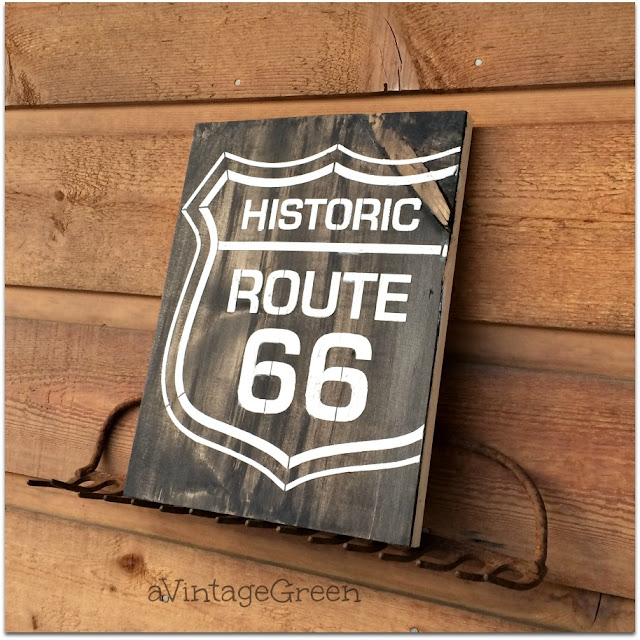 The chalkboard sign got some additional lightly stencilled words under the drywall compound stencilled Historic Route 66. 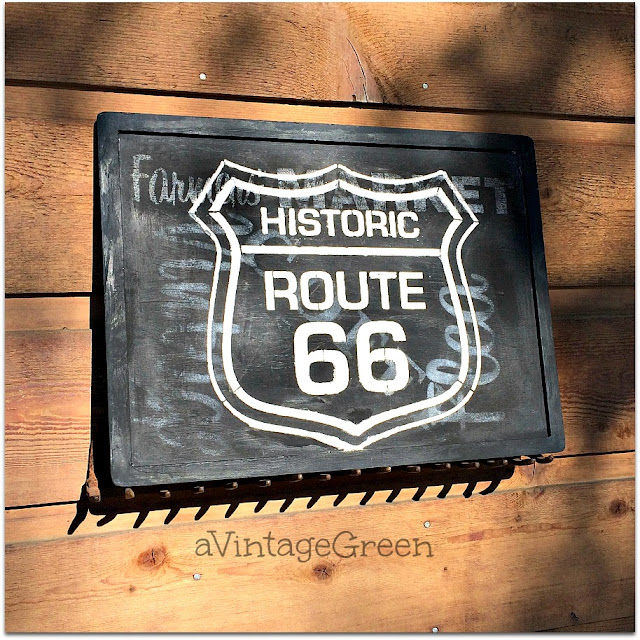 Read Debbie Doo's January 2nd post -  How to Stencil Using Plaster! Debbie included a suggestion she received on her Facebook page from readers to use molding paste or drywall compound to stencil and since I had drywall compound on hand I tried it out.

When I finished making the signs I checked on Pinterest - drywall compound - and WOW, what a lot to see/learn !

Added the back hook before I started so I wouldn't break the plaster off later.

This was my first try.

Placed the stencil, held it with some masking tape (and my fingers) then covered the surface with a thick layer of drywall compound. Removed the stencil right away and had a strange raised stencil. 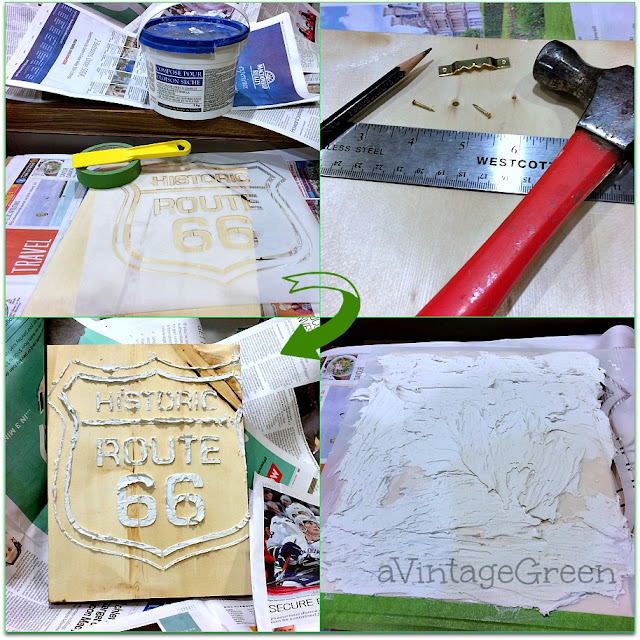 Put it aside to dry overnight. Scraped the plaster off the next afternoon. FAIL. Drywall compound too thick, not a useful sign, can do better.

Tried again with a different sequence. 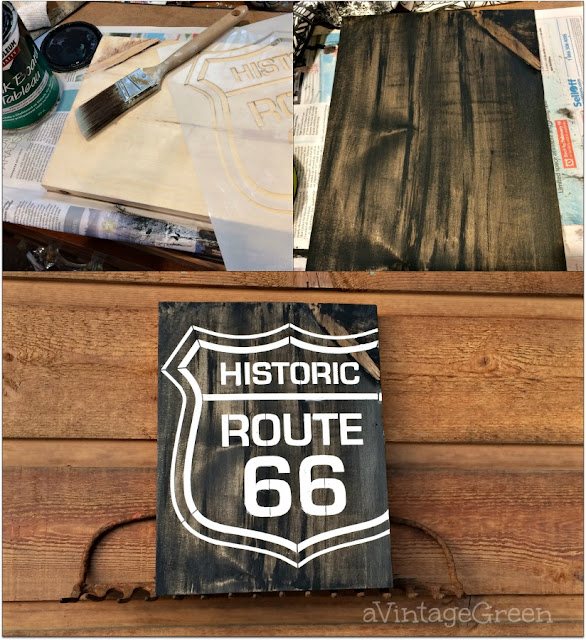 Painted the board with Rust-o-leum Chalkboard paint and dry rubbed most of the paint off and then used a damp paper towel to pull more paint off. When dry, waxed with clear wax. Buffed.

Then - used the same stencil and drywall compound and applied thinly with the spatula. Same sequence as used in Project # 2 (below).

To clean the stencil after use - carefully scrape the drywall compound off the stencil  - not into the sink, clogs drains - clean it onto newspaper as much as possible. Wash stencil clean (paper towel in sink drain to catch any remaining drywall compound).

When cleaning the stencil on a piece of newspaper (first try Project # 1) I got the next idea. 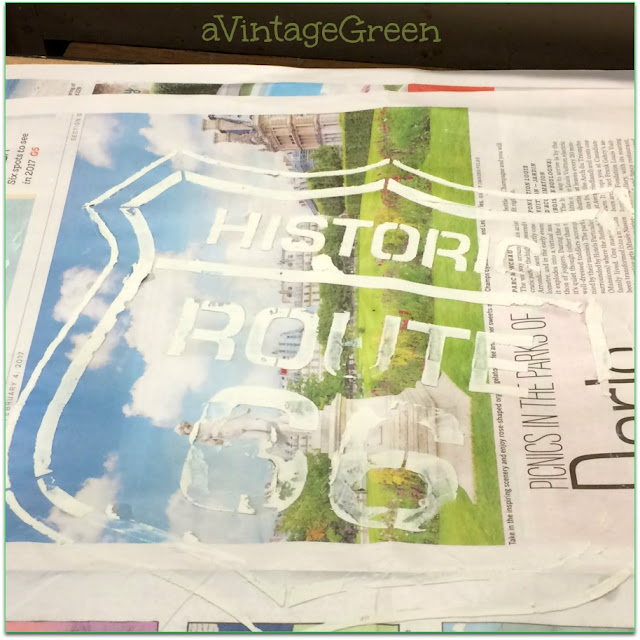 Why not try a very thin coat of drywall compound on a chalkboard Farmer's Market sign that I was going to be changing. Donna of Funky Junk Interiors repurposes some of her signs so I decided to try that too. Here is the first try with this sign here February 11/16. 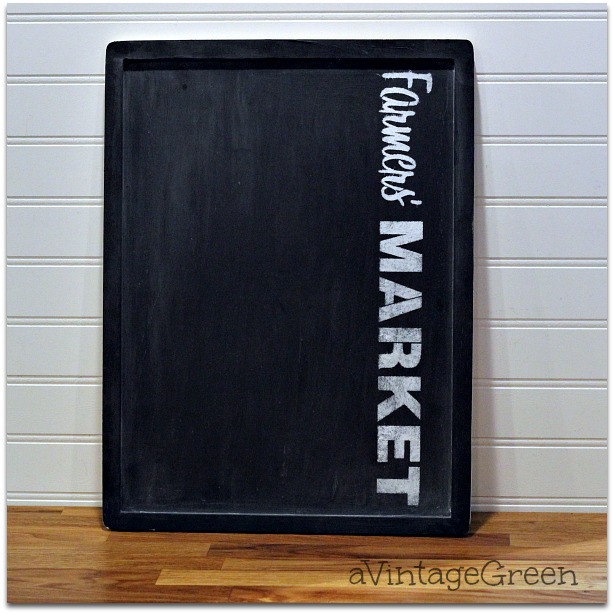 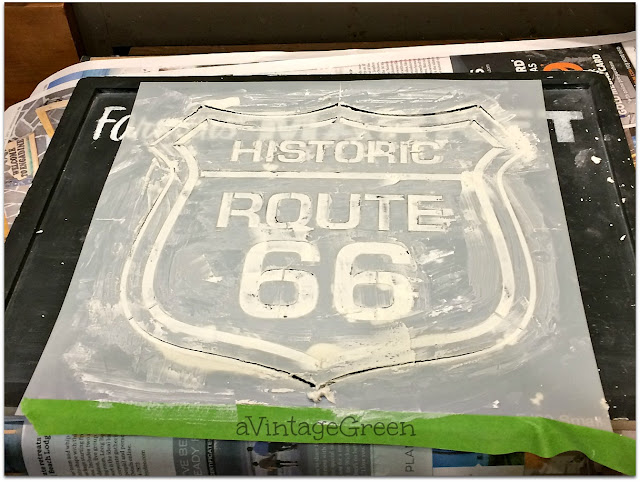 Chippy look, needed a bit of cleaning up but drywall plaster flicks off easily before it has time to cure/dry. 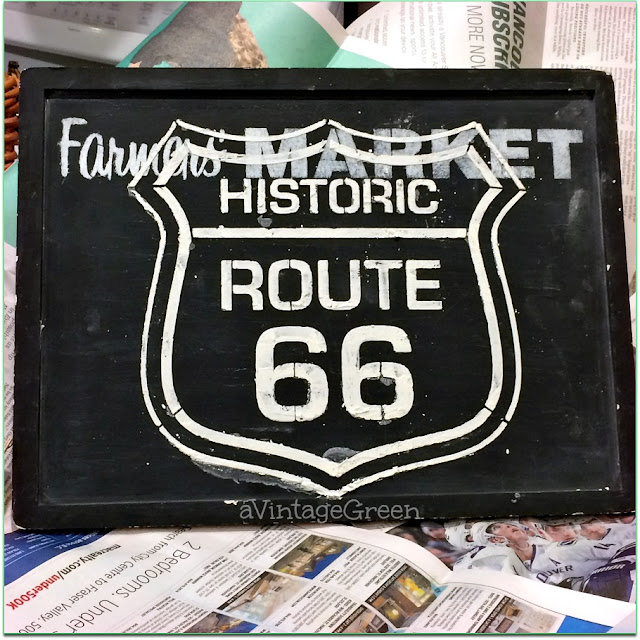 Next step - now what would the next step be?

Decided to add CeCe Caldwell clear wax. The wax removed most of the loose drywall compound and somewhat removed the 'outside of the lines' of drywall compound. Used a damp q-tip to clean edges. 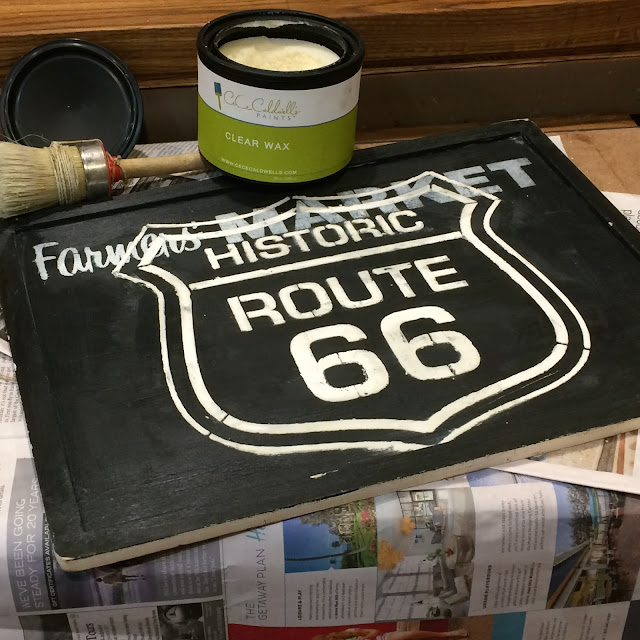 The lettering Farmer's Market behind the sign was too prominent so I black stencil brushed it 'backward' and also added pale stencilled Vintage, Flea, Coffee to even out the 'behind to the sign' words. 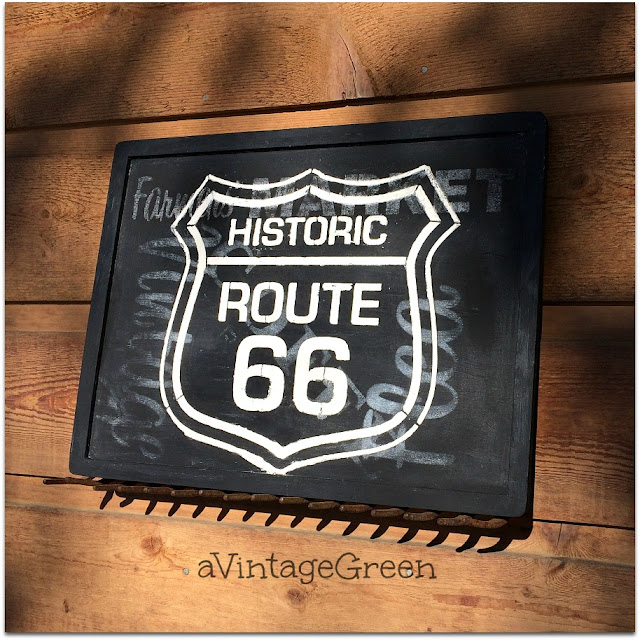 Finished the Historic Route 66 sign by painting the edges and back CeCe Caldwell Beckley Coal, added a hook, waxed, buffed the black areas (carefully around the drywall compound areas).

I used my finger to apply the wax to the Historic Route 66 lines and when I buffed it was very carefully and lightly. Used damp q-tips to remove a few areas where the compound was outside of the letters. 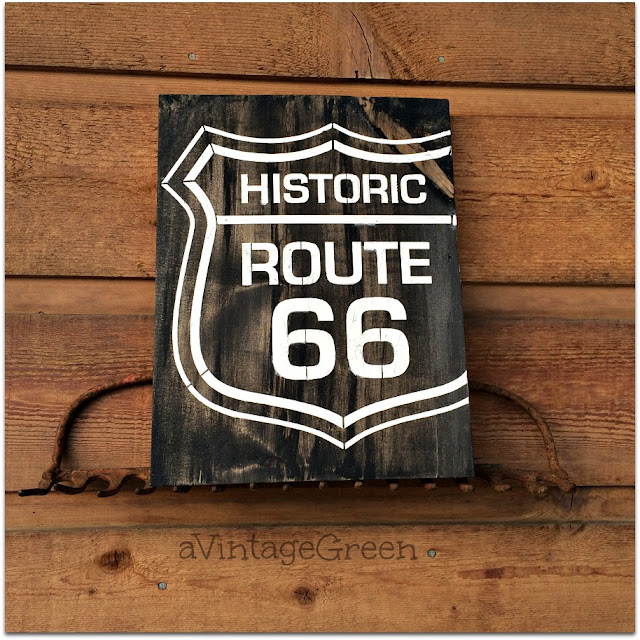 Drywall Compound breaks off if it is NOT totally dry. It has a bit of a powdery texture, takes some practice to get a raised but not too raised pattern on the board/surface. Needs to be a raised but more flat finished surface.

The drywall compound - very thin coating - made a great quick sign from the Historic Route 66 stencil.

Wednesday
To Grandma's House We Go, The Thrifty Home, WebMDiva, Raggedy Bits, Raven would, The Essence of Home, Katherine's Corner,

Email ThisBlogThis!Share to TwitterShare to FacebookShare to Pinterest
Labels: CeCe Caldwell Beckley Coal, Debbie Doo's How to stencil using plaster. Using drywall compound to add a stencil to a board