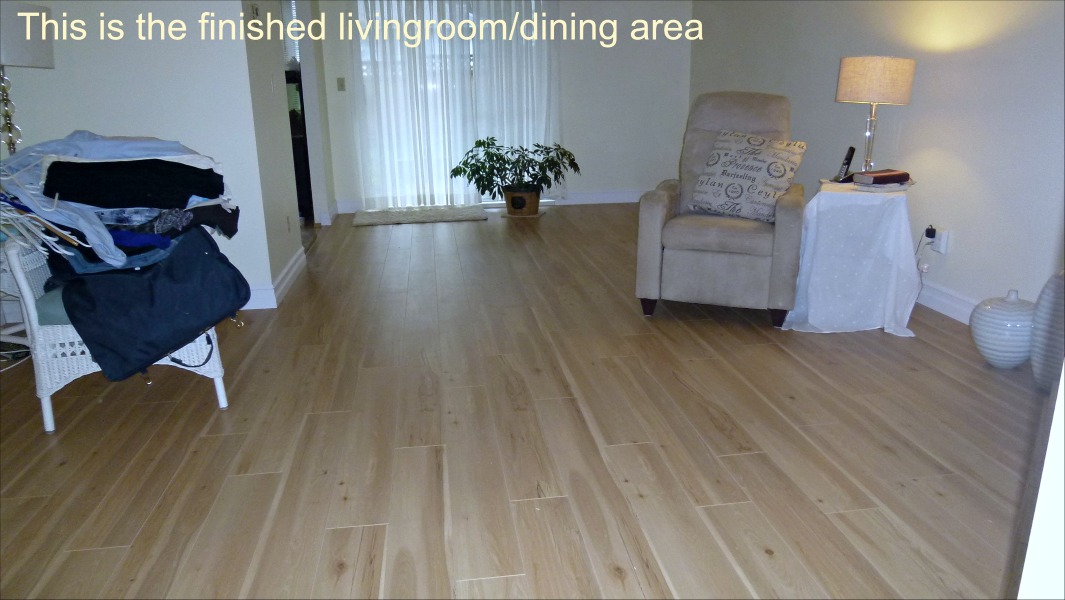 that night a pipe sprung a leak and there was water damage in the hallway.

I borrowed photos from my brother's post (below). The replaced pipe and the drying units from the First On Site company (below). 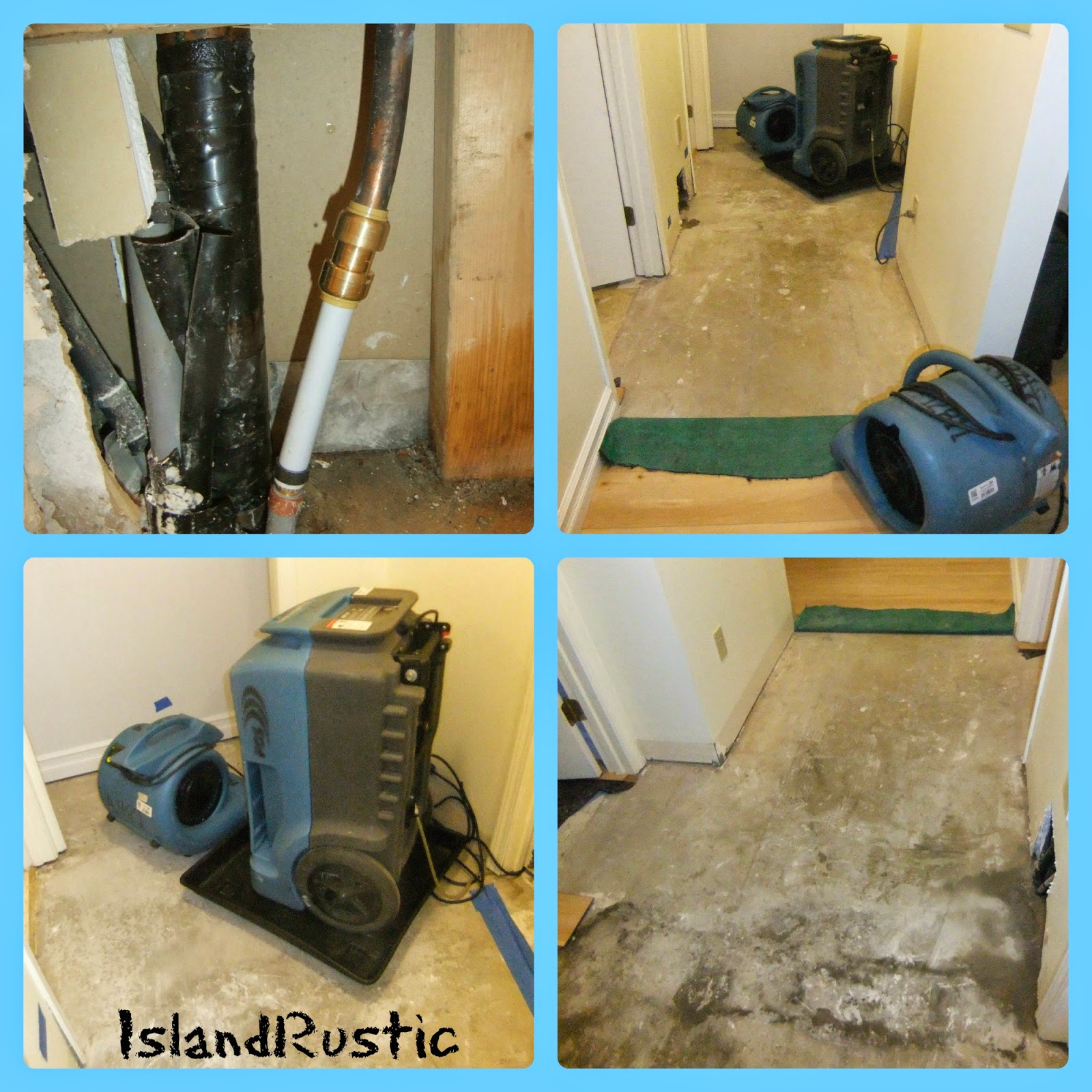 My brother removed the flooring and underlay that got wet. Then he had to go home (he had been working for 3 weeks on Dad's condo and needed to take care of home stuff).

Strata Management was called. They called First on Site to dry the area. They brought in Roto Rooter who repaired the leak, and their handyman fixed the hole in the wall where the pipes were located, he put in a piece of drywall (the hole was enlarged to the width of the wall) and plastered (today (Sunday the handyman will be sanding, adding more plaster if needed). That is ALL that Strata would cover. I hadn't realized the limit of their involvement. 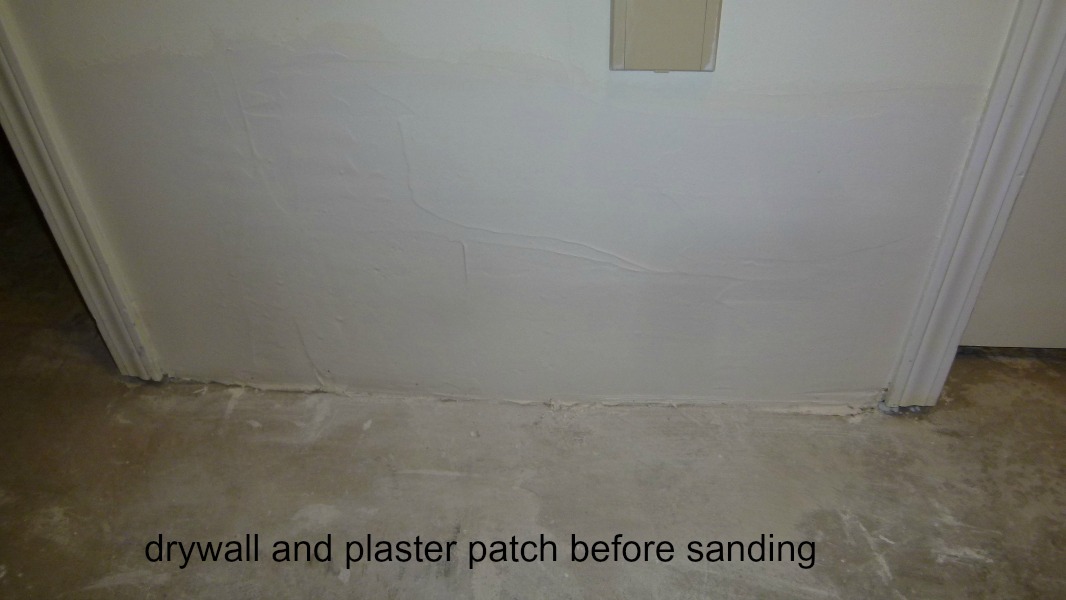 So back to the planks and underlay...

I became the temporary person-in-charge to make the repairs to the floor happen ( which I didn't know until I started phoning around to find out why the work hadn't been finished). I thought that Strata and the First On Site company would do ALL the work. Obviously I must have been dreaming. No, they don't as I found out. Phone tag continued.

I phoned the First On Site manager, then the Strata contact person and later the handyman for the Strata. Guess what - it was MY job to make things happen. I had to arrange for the wall to be repaired. I needed a floor installer and the person who did the original work for us wasn't available. Small panic.

I went back to the Laminate Warehouse (where the first batch of flooring was purchased) and ordered more 5 laminate plank packages and underlay. 100 square feet of each type each. They were available the next day and I moved them into the condo storage area (fortunately there was a dolly in the store room, each pack weighed about 40 pounds and I could not budge them without a trolley).

Luckily Treston's Mom who sold the replacement flooring said her son was a floor layer AND since it was raining and he couldn't get to his regular job he came over Saturday at 8 am and worked until 5 pm and the floor is now finished (again). Whew. He removed baseboards in the bedroom and den and closet, removed a great many more pieces of the recently installed laminate planks in both rooms so that the puzzle (of the flooring pieces) could be reassembled correctly again, put down the underlay, replaced all the planks (with some lovely cuts to go under the door frame areas) and put it all back together again. 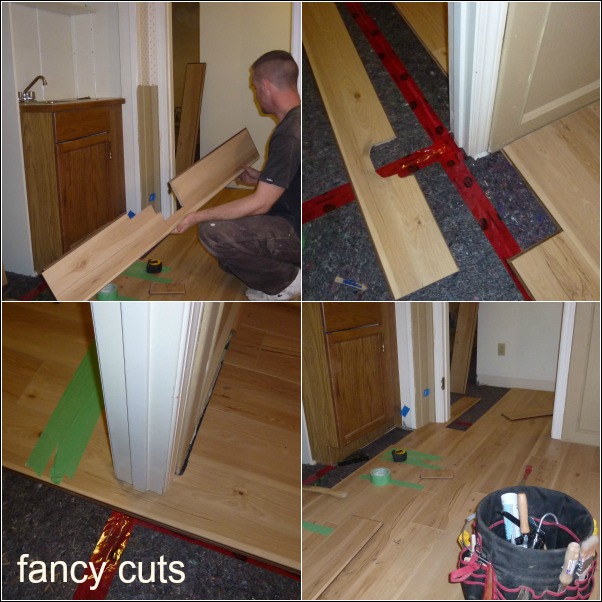 Nothing much to see except the flooring. The fancy cuts to get the planks under the door trim were done on a small table saw ON THE FLOOR. The guy is an artist. 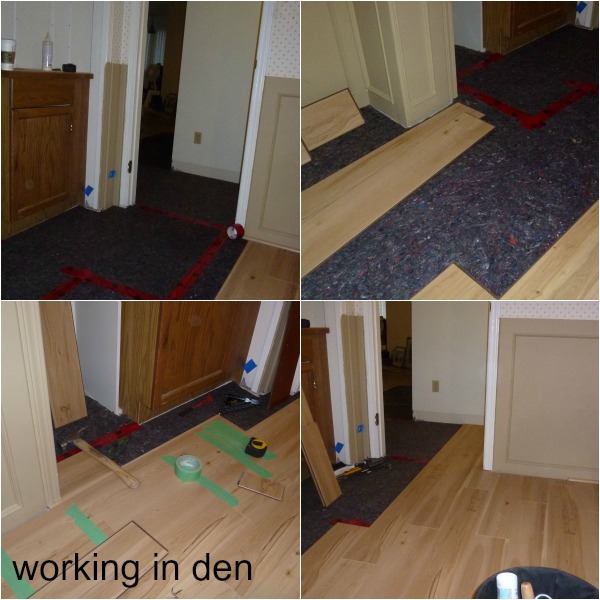 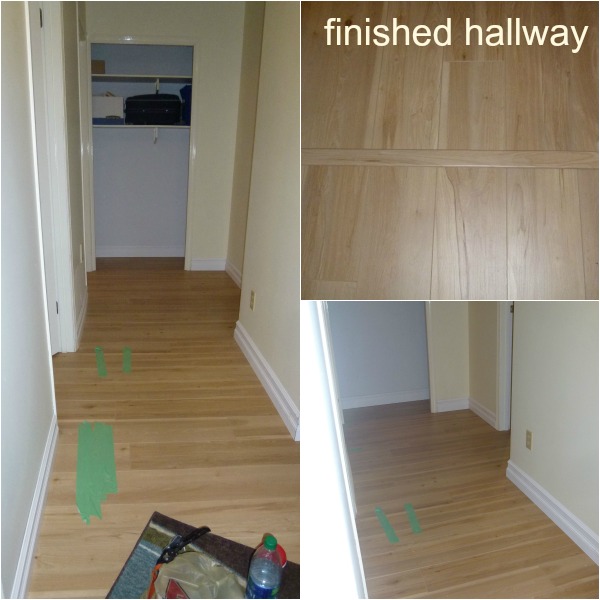 The green tape stays on 24+ hours to ensure no movement until the dots of glue in those areas sets. Forgot to take a picture of the heavy tins of paint that are sitting on the threshold pieces until the glue dries.

You can see my pink jacket - that is where I did my paperwork - there is a window in that corner. I had a small folding table, brought a folding chair with me and two boxes of supplies (computer, paint/brushes, tape, glue, hammer, clip on lights and a power bar etc) for the work I did. 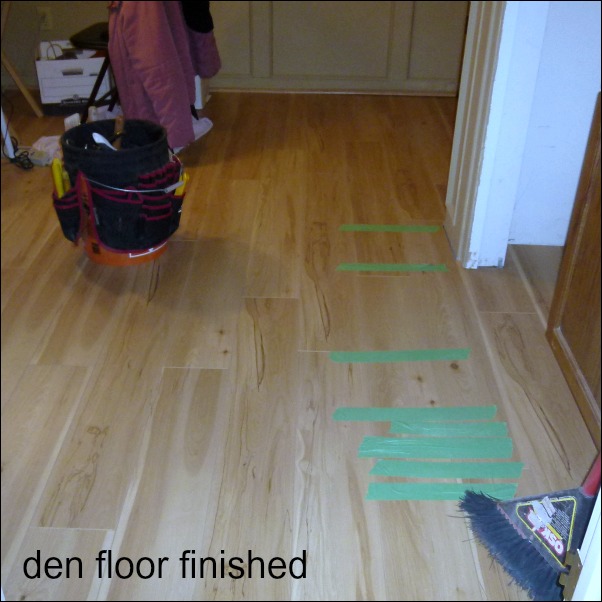 Treston - 22 years old, buys his tools with great investigation and thrift, loves his family, is going to help reno his parents home so his grandparents can move in. A mothers and a grandmothers dream young man.

Not my usual post but that is what I did Saturday - 8 hours at the condo which included a time-out for a short and very sweet visit in the coffee lounge with my dear Auntie C and her son C with my Dad, Sister and BIL at Dad's new home.

Got some small wallpaper repairs and paint touch-ups done in the den while Treston was working, kept the sweeping and garbage under control, got my December bookkeeping done. Was the gofer. 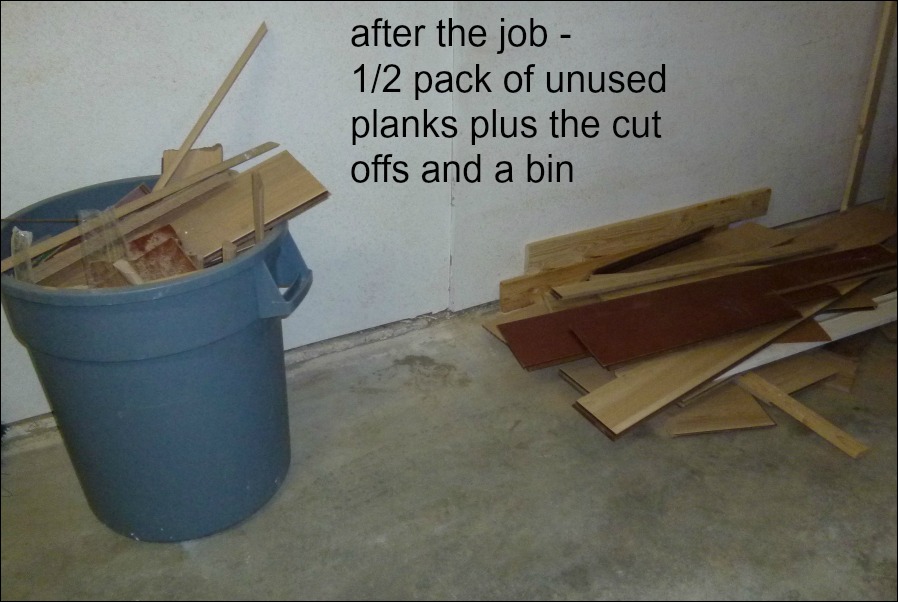 I got a call from the Strata Handyman at 8 am today (Sunday). He will finish the patch in the condo hallway today. I had hired him (as a private painter) to paint the ceiling in the den and he is going to do that today too. He starts work at 12 noon. I cleaned up more of the dust in the garage. Wet/dry vac time. Spider webs begone. Wore gloves. I was finished and gone by 2:00 (painter left at 1:30).  Two jobs now off the list.