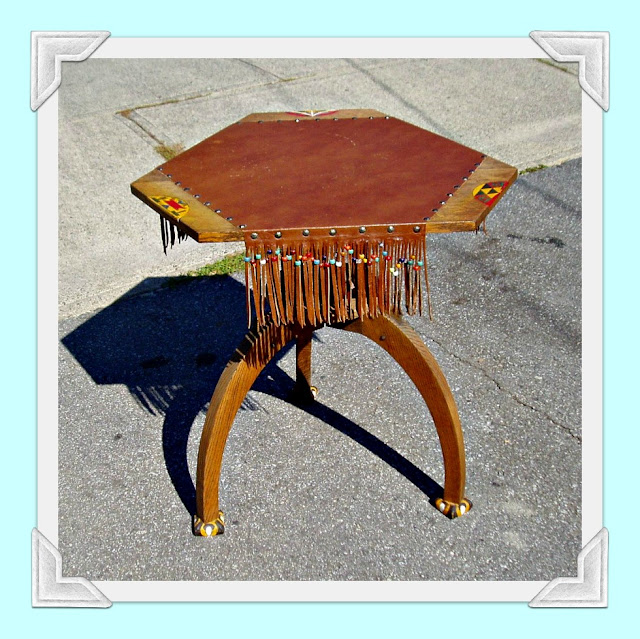 This table moved around in the family. It is now at my sister's (here is her post on the table). She has great photos of the table settled in to her home. I am quoting directly from my sister's post:

It’s a small oak table (29″x 29″x 29″) with family history. My father says that it was in the house in Victoria BC that my grandfather bought in 1928 from a former officer in the British army in India. The officer bought the table in India some years before. When my grandfather sold that Victoria house and moved the household goods back to Alberta, the table came with them. My father saw the table on his brother’s ranch, in the chicken house, covered with bird excrement, mildew and cobwebs. Uncle David gave it to my parents, who repaired and re-finished antiques as a hobby. Mom and Dad  cleaned it all up, repainted the decorative pieces with as close a match as they could, and replaced the round shelf underneath. I first remember seeing it in my parents’ home in the early 1970s, when Dad asked for help to replace the goatskin on the top, which had been damaged by a moving crew. I found some soft goatskin, and used the ratty old top as a template. 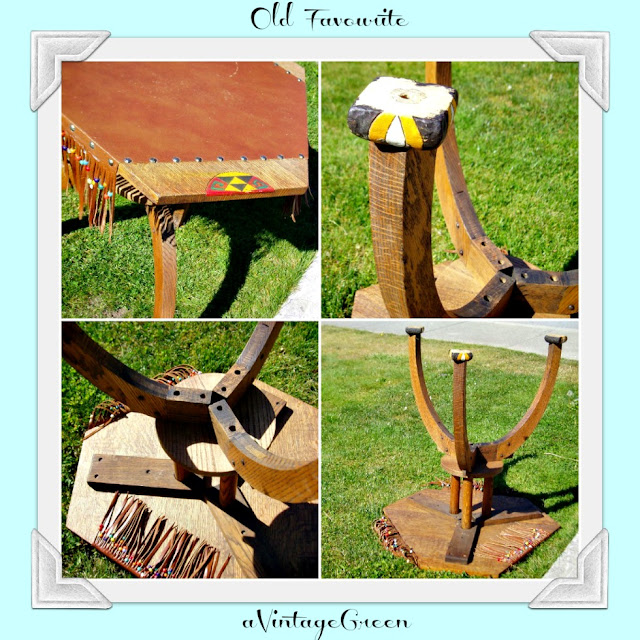 The table moved with our parents and was in their retirement home until Mom moved into care and Dad got a hospital bed and stuff got seriously rearranged. Dad offered the table to my brother who took it home for quite awhile and then Dad and my brother gave it into my sister's care. That is where it will stay. My part - I took these pictures on my lawn while the table was in transit. Interesting piece, good to have some family history to go with it.


Sharing with Claudia of Mockingbird Hill Cottage on her # 1 A Favorite Thing Party
Posted by Joy@aVintageGreen at 6:23 PM