Bought a really great but too tall for the space fridge. Had to remove the over the fridge cabinet that DH had built when we first moved in to our home. It was a mega sturdy and very heavy job. Had to recycle (kept the doors and hinges and oak plywood pieces). 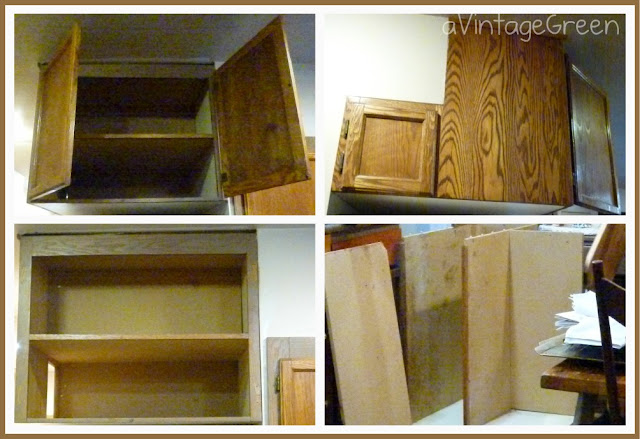 Started this job in late December. Its now February. The bones of the job are finished. Its the 'pretty' part that is still to come.

So, here is our progress. 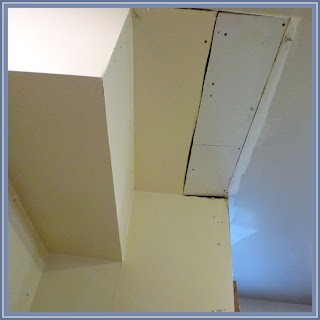 DH had to add framework inside the hole so that a piece of drywall could be attached. He did this work when I wasn't home so no pictures of that part of the job. I gather it was not a pleasant experience, but it was done and the drywall was screwed into the framework.

Next was the mudding. The edges were tough to do because of metal joins that stuck out on the far side, plus mudding upside down (well it felt that way) isn't as easy as it was 30 years ago when we did the bulk of our renos. 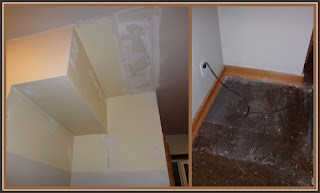 The new fridge was delivered, doors and handles put on and ... the fridge sat out into the kitchen until February - six weeks of walking sideways to get the from the hallway to the kitchen. We both got 'whatever under the weather that was going around' and it took quite awhile to get the 'steam' needed for finishing the mudding and the really disliked sanding.

The new fridge was about 1 inch too tall to fit under the cabinet. It sometimes seems as though the project was the fridge rather than the repair of the ceiling, and sometimes the project is a cupboard in waiting (to fill the repaired space). 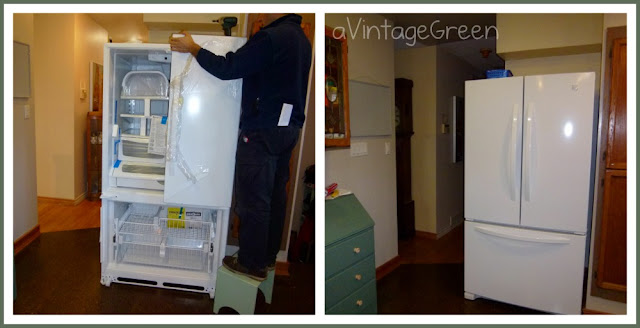 The delivery gentlemen each wear a harness to assist in the lifting as it leaves their hands free to guide and adjust. Doors had to be installed, then handles. They put it in the space and took all the packing materials away with them. Notice I did not show the ceiling hole in these photos, don't know why. 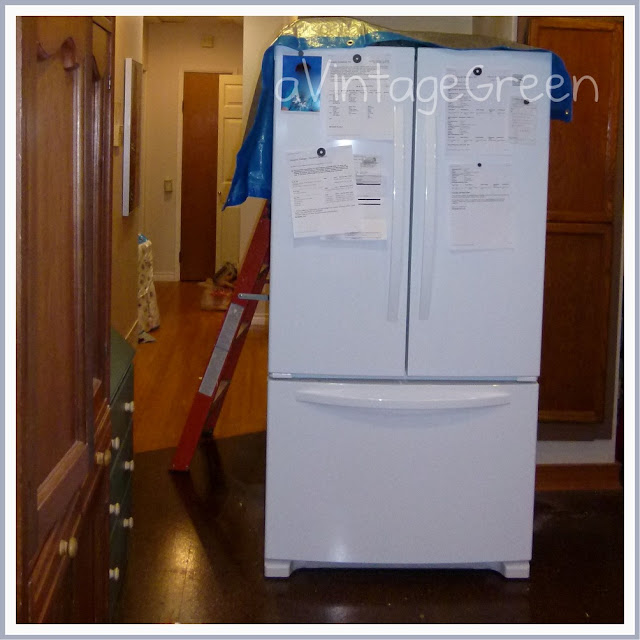 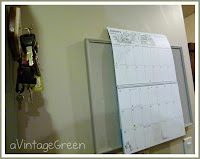 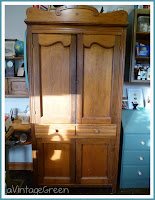 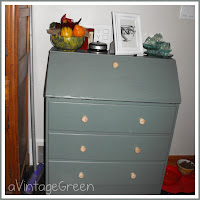 This is the reality of January, we just ignored it and carried on. Still not showing the ceiling. Well, the picture below shows lots of ceiling. I didn't include pictures of all the sanding dust but there was a lot of dust (wear a paper mask and glasses). You can see part of the the kitchen furniture, the pie safe (post here) and the free desk (post here) and the organization calendar and painted bulletin board (post here). I found it interesting that several of my furniture posts ended up in the same area of the kitchen. 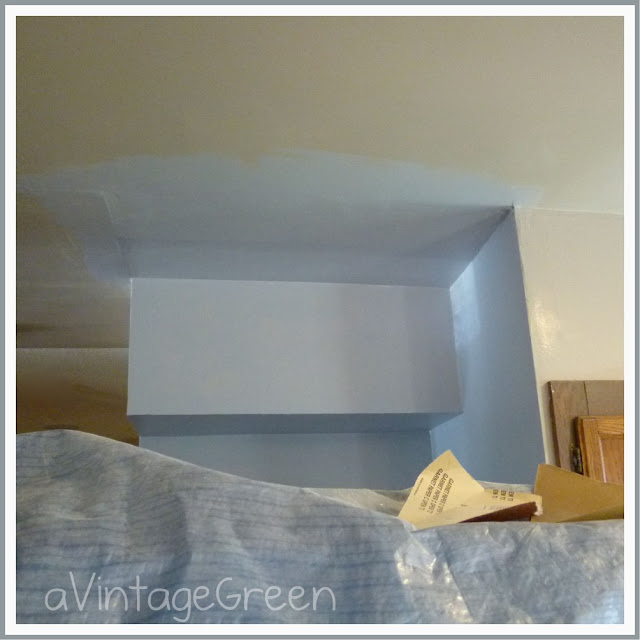 We kept a jar of the wall paint (a pale grey) from our earlier kitchen big reno and after sanding as much as we could stand, and removing the dust I painted a base coat. After it dried I painted the top coat. Yes I can see the problems we did not solve in the 'joins'. DH is going to build a shelf or a cubby or a small cupboard or ... (I will likely blog about that too). Both of us did not like sanding 'over our heads' so we just went for 'ok' rather than 'near perfection' and we will live with it. 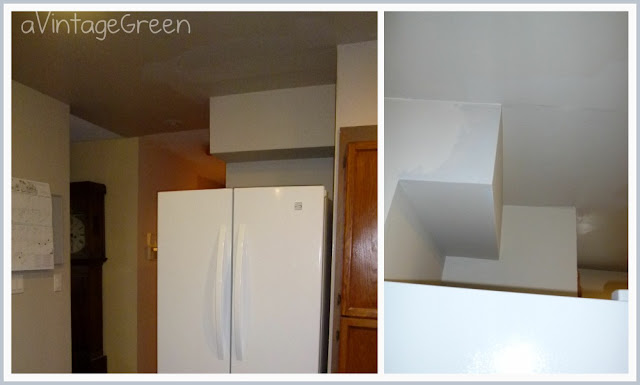 So, worst of the problem is fixed. Fridge is pushed back. Hallway is clear. Stepladder, sandpaper and tarp and dust no longer mess up the kitchen. Cork floor now has two additional dents but since the floor has be well lived upon a few more dents don't really matter. 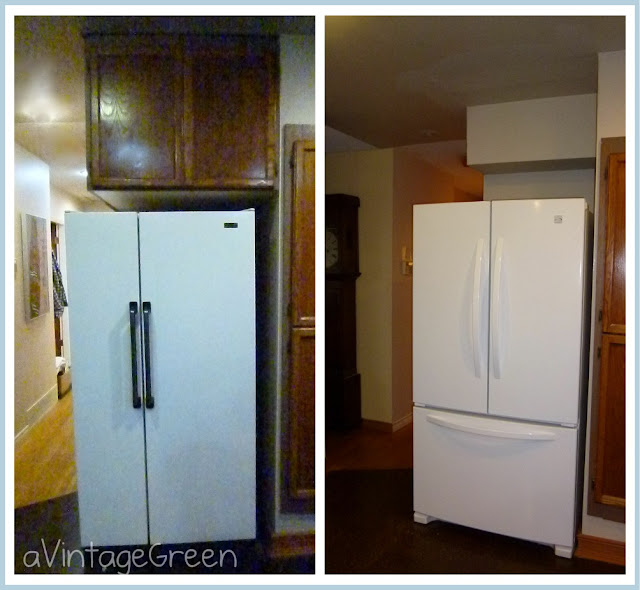 Since the kitchen ceiling was painted with two different types of the same colour (I think it was satin and flat) when we did our 'big kitchen reno' a few years ago it is time to paint the ceiling again. That is our March Break from school plan (I am getting a friend who is very good at painting to work with me, I do 'find the stuff' and clean up as we go and she paints). That will of course tie the paint job I just did in with the ceiling painting in the very near future and make the ceiling all the same colour. I suspect we have to wash the ceiling with TSP first. I think we will be painting hallway the same colour as well since I can't find the hallway paint and I painted some grey on the hallway wall.

Looking forward to a shelf/small cupboard or whatever DH decides to make for the 'refreshed' over the fridge space.

and then Moms Make Lists hosted an Empty Your Archives Party - LOVE the idea.