Welcome to JoAnn of Jo's This and That
A November Church Sale found, one hour from home. Arrived at starting time, 8:30 (next year at least half an hour earlier would be better), lineup wound around the outside of the building, past the parking lot, around the corner and half way down the short street. Had to park about 1 mile away (bless DH), I was 'dropped off'. Church sale opened on time. Every room was crammed (walk sideways carefully) with people. This is a well know and totally overfull with stuff to buy, well organized and priced on the high side multi-rooms sale (they used every classroom, hallway and multiple entry ways in the really large two story and basement church building). Lots of stairs up and down to find all the rooms. St. John's Ambulance crew on hand. Tea and coffee and muffins sold outside the building. A check-room for storing bags of 'already bought' stuff so one can shop 'hands free'. A great many of the congregation including seniors and youth were out in full force, with vests and name tags and printed lists of  'where different types of things were located, give direction, help with crowd management, lots of people to take cash and bag. Very well organized. Altogether a good sale.

My best buy - this little portable. Empire Aristocrat, Made in England. Works fairly well but definitely not for a speed typest. I had almost forgotten how awful it is to type on a typewriter, computer keyboards have totally spoiled me for the manual. Cover in great shape too. I had to turn over the ribbon (red was on top) and it took awhile, my fingers and nails were quite black with ink (and I do remember inky fingers from my typewriting days).

Last dahlia's of the season. First freeze Saturday night. Longest season for dahlias that I can remember. These were picked mostly unopened and have 'somewhat' opening in the house.

A link to an Australian site, ozTypewriter has a Typewriter Museum with information about the Empire Aristocrat. 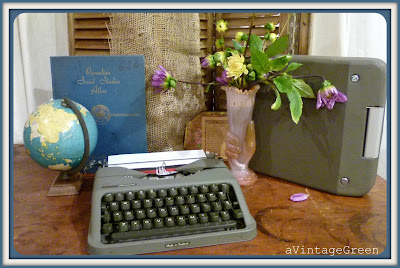 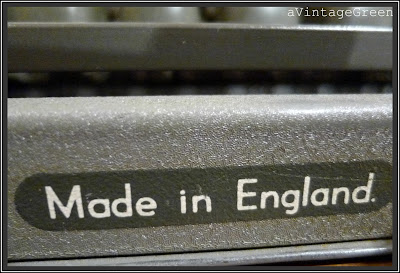 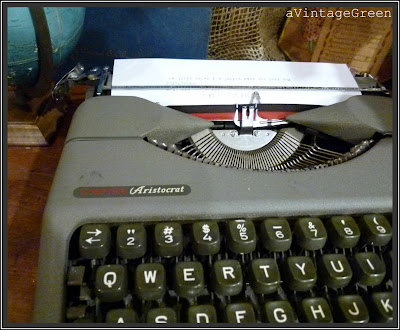