Getting Ready to Ring in the New Year .. and Bells at Weddings 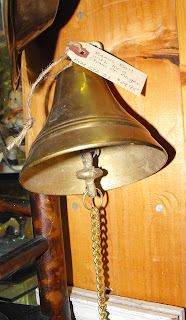 Bells of all types; brass, cast metals, glass, china, even wood are to be found. I've copied and referenced a few sites on why bells are rung to bring in the New Year.
An interesting use for bells this year was a bride who 'collected' all the bells I had in stock. She had bells rung instead of the custom clinking on glasses during her wedding reception. She had rented the dishes and didn't want to pay damage fees on broken glasses so she bought a bell for each guest to ring and after the reception she had the beginnings of bell collection for her new home. I've since read about bell ringing at receptions.  "Adaptation of an old Irish custom as an alternative: The ringing of a bell is said to restore harmony between a couple; it's also said to remind them of their wedding vows and to keep evil spirits away. A bell has become a traditional Irish wedding gift. They have been used at the reception where they are to be used in lieu of clinking glasses. From: newsgroup soc.couples.wedding"

On the Asian Art Museum web site "Bells have been rung by the Japanese so that the bad experiences, wrong deeds, and ill luck of the past year will be wiped away. Thus, bell ringing heralds the start of a joyous, fresh New Year."
Describing why bells are rung for the new year at a ceremony held at the Asian Studies building at UBC, a discussion site wrote "Buddhist belief has it that one rings a bell 108 times at midnight on New Year’s to ring away the 108 bonno (Earthly Desires) that shackle mankind and keep one from reaching inner peace."
"The first rising bell is a symbol of Chinese New Year. Chinese people like to go to large squares where there are huge bells set up on New Year's Eve. As the New Year approaches they count down and celebrate together. People believe that the ringing of huge bell can drive all the bad luck away and bring fortune to them." 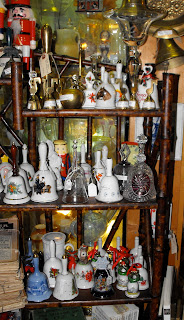 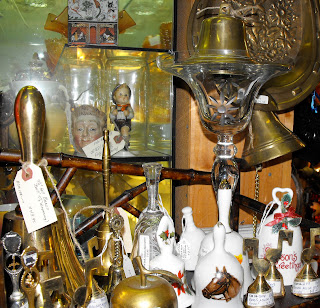 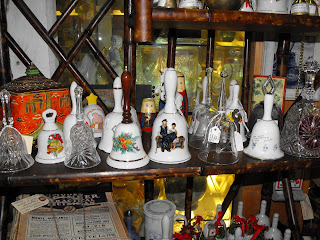 Posted by Joy@aVintageGreen at 8:26 PM