Went out fo a couple of hours this morning, looking for treasures for my booth. Found a little bit of unique and vintage. 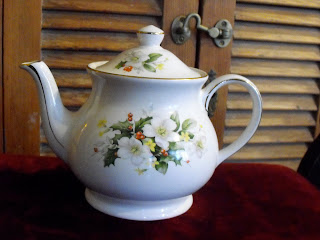 Looked at a few teapot sites: http://www.teapots.net/ The History of Teapots who write "here are two legends about the invention of tea. Some attribute the discovery of tea to Shen Nung, a Chinese Emperor in the 3rd century BCE, who sat under a tree while boiling his drinking water. When the leaves of Camellia sinensis fell into his bowl, the agreeable taste prompted the genesis of tea drinking. An alternative account gives credit to a Dharuma Buddhist monk who traveled to China from India in the 5th century CE. During his fifth year of a seven year meditation undertaken to prove his faith, he became sleepy. In an effort to remain focused he cut off his offending eyelids and threw them onto the ground, whence sprang the tea plant. He decided to make a drink from the leaves and discovered it kept him awake, allowing him to pursue his spiritual studies." 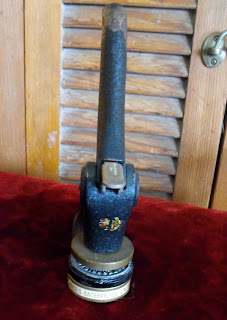 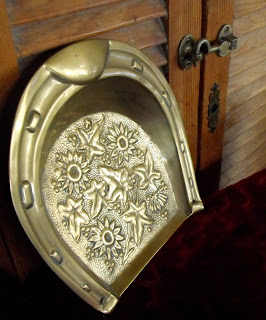 Brass Horse shoe shaped dust pan (most likely a wall ornament.
Posted by Joy@aVintageGreen at 11:47 AM